After a brief respite of milder and wet conditions, winter is set to return with a vengeance to parts of Britain as up to a foot of snow falls over 40 hours and temperatures drop to as low as -12C (10F).

Blizzard conditions are expected to strike from early tomorrow morning until Thursday night across Scotland and northern England – while freezing rain, which turns to ice on hitting the ground, is also possible.

It comes as much milder conditions have moved into southern England and Wales, with highs of 11C (52F) expected in Cornwall today – although much of the South will be hit by heavy rain over the next two days.

However, colder air is hanging on in the North, with highs of just 3C (37F) expected amid sunny conditions this afternoon. It follows a warning of ice this morning for Scotland and England as far south as the Peak District.

Britain could also be hit by another ‘Beast from the East’ in the coming weeks because of an unusual meteorological event taking place above the North Pole. The sudden stratospheric warming, or SSW, began on Tuesday last week and could trigger weather changes that would lead to a severe cold snap in Britain. 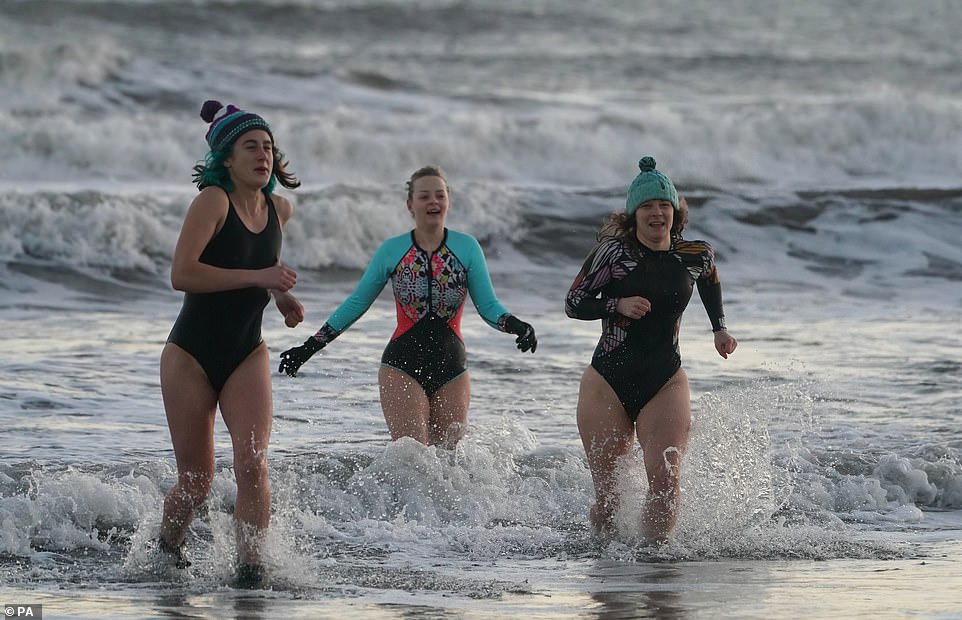 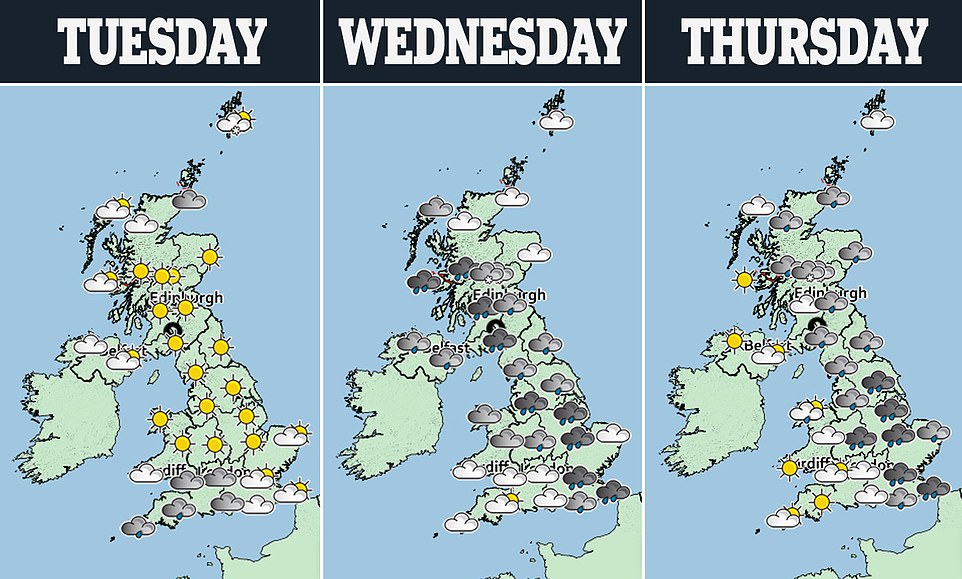 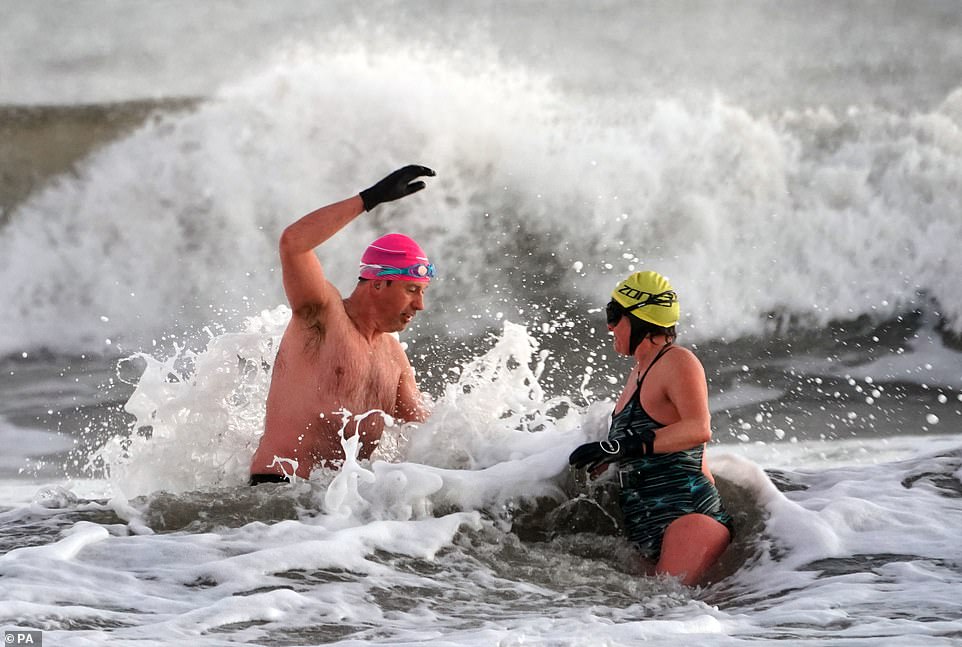 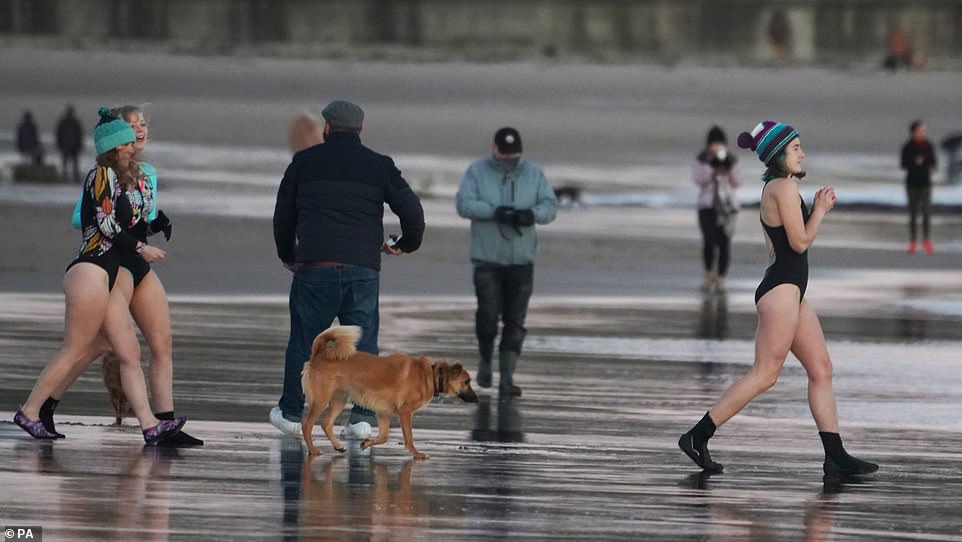 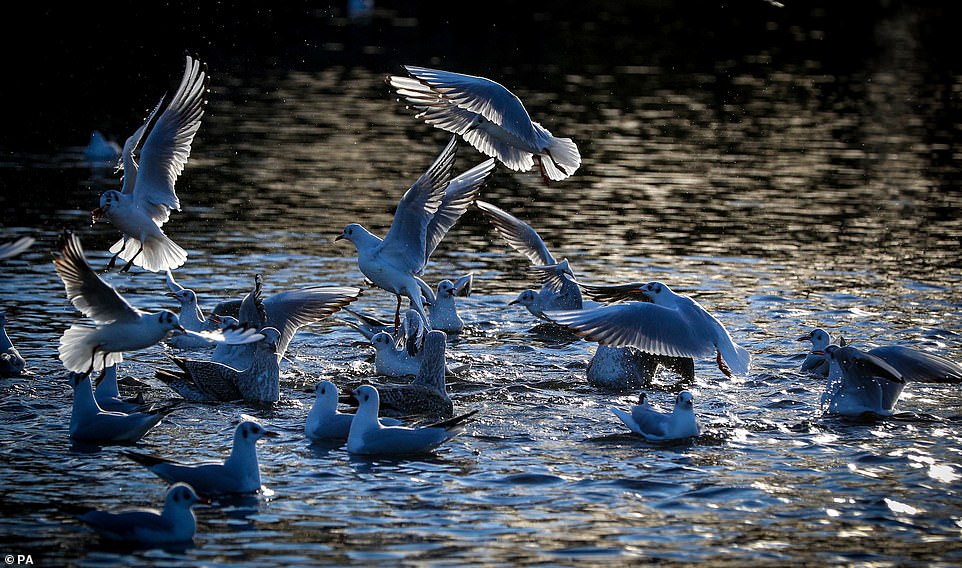 The Met Office has warned widespread snowfall of up to 6in (15cm) is likely in areas at least 500ft (150m) above sea level in Scotland and northern England from tomorrow, and up to 2in (5cm) at lower levels.

But in some areas, particularly on high ground, there is a chance up to 12in (30cm) could fall. ‘Significant travel disruption’ is predicted, with the chance of motorists becoming stranded and isolated rural communities ‘cut off’.

Britain could be hit by another ‘Beast from the East’ in the coming weeks because of an unusual meteorological event taking place above the North Pole.

The sudden stratospheric warming, or SSW, began on Tuesday last week and could trigger weather changes that would lead to a severe cold snap in Britain.

Dr Richard Hall, an expert in SSWs from the University of Bristol, said it ‘loads the dice’ or ‘tips the odds’ in favour of another blast of heavy snow and sub-zero temperatures from Siberia.

A study by experts at the Universities of Bristol, Exeter and Bath shows how dramatic meteorological changes above the North Pole can have severe consequences for the UK’s weather.

During an SSW the stratosphere – the layer six to 31 miles above the Earth’s surface – can rise in temperature by up to 50C over a matter of days.

This disturbance can travel down through the atmosphere to the Earth’s surface and cause shifts in the jet stream, the fast-moving air currents that cool Europe.

UK experts studied 40 stratospheric warming episodes from the last six decades in the latest study, published in the Journal of Geophysical Research. Dr Hall said an SSW happens ‘every two years in three’ and one is ‘taking place at the moment’.

In 2018 there was an SSW event two weeks before the ‘Beast from the East’ brought 50cm (20in) snowfalls.

However Dr Hall said only two thirds of SSWs reach the surface and the current one could ‘just peter out’.

He added: ‘The main area of impact is over Siberia where you get intense cold and that then extends westwards toward Europe. We are right on the edge of this and so slight variations can affect if it reaches us.’

A flood risk also remains for many parts of England today with a total of 36 Environment Agency alerts in place across the country along with eight more serious warnings which are all in North Yorkshire.

Forecasters predict sub-zero conditions will cause more problems in Scotland today. Met Office meteorologist Nicky Maxey said: ‘This could be the time to begin looking after elderly or vulnerable neighbours.

‘Relatively warm rain is going to collide with cold ground over Scotland. It will certainly be worst over high ground but we will also see some snow down to sea level.

‘Nights are going to be cold, too, with -10C or –12C on Thursday night. Daytime temperatures will also be pretty low across Scotland for the rest of the week.’

The snow is predicted when a weather front moves north east through tomorrow, falling as rain in Wales, southern England and the Midlands, but turning wintry as it hits cold air over the Pennines.

In its warning, beginning at 8am tomorrow, the Met Office said: ‘The area of rain is expected to increasingly fall as snow, at least for a time, as it encounters colder air across Scotland and parts of Northern England.

‘There remains a possibility that milder air makes inroads, with the snow turning back to rain more widely, in which case the snow would largely be restricted to the highest ground.’

The Met Office also warns of possible power cuts and disruption to mobile phone services. In the wake of the heavy snow and rain, the end of the week is set to be mostly cloudy with some patchy rain at times.

The weather is likely to remain unsettled for the next fortnight, with ‘spells of rain accompanied by strong winds at times’.

Snow remains possible ‘at times’ in northern areas, especially on high ground, and temperatures are likely to remain ‘below normal’ for the time of year, in the low single figures Celsius.

In the Highlands, melting snow brought flooding yesterday, with the A9 at Slochd, 15 miles south of Inverness, particularly badly hit.  Bear Scotland said it had 38 gritters out across the north-west alone last night.

The severe weather followed in the wake of Storm Bella, which struck in the days after Christmas. And after a short reprieve, parts of the country were then left under a blanket of snow in the early days of the New Year. 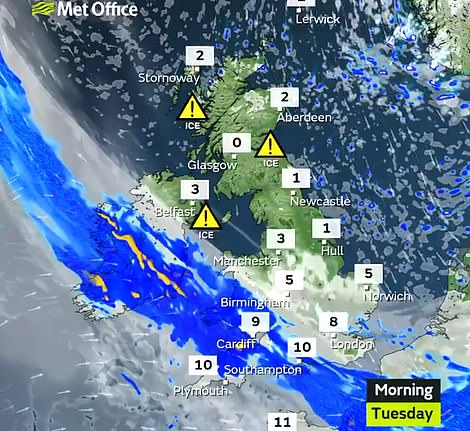 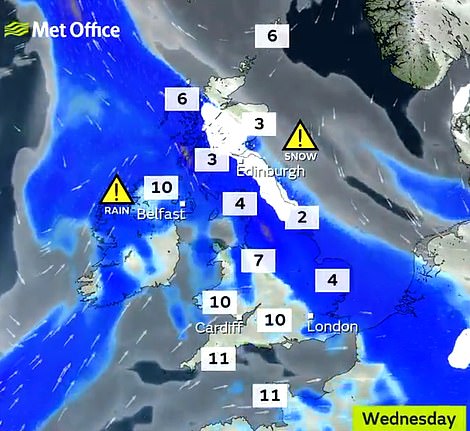 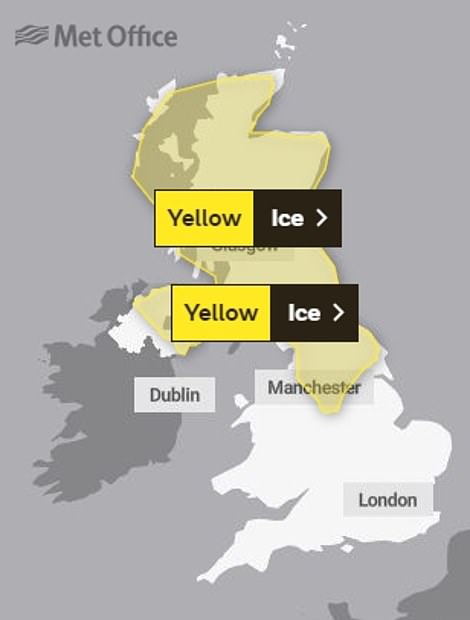 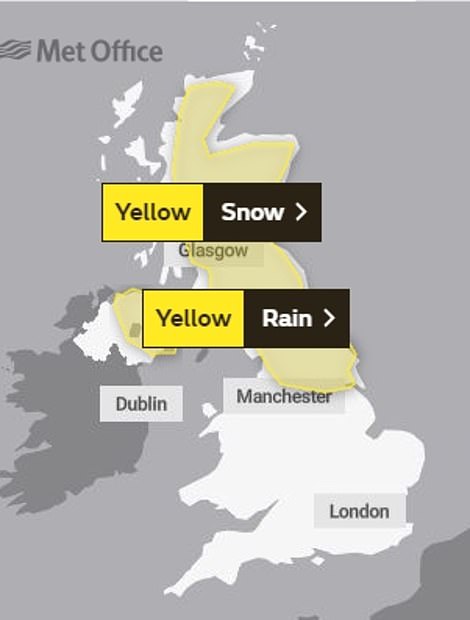 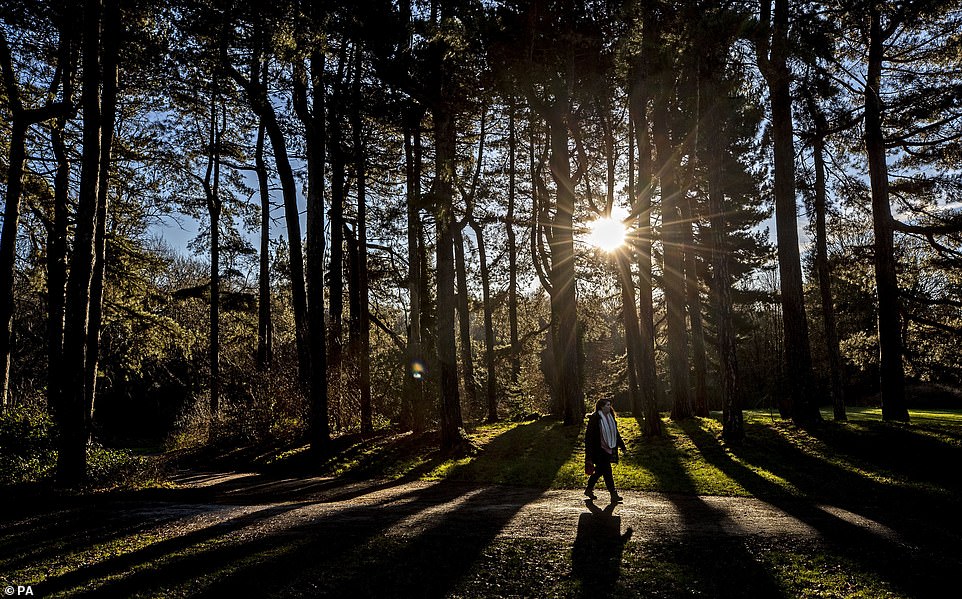 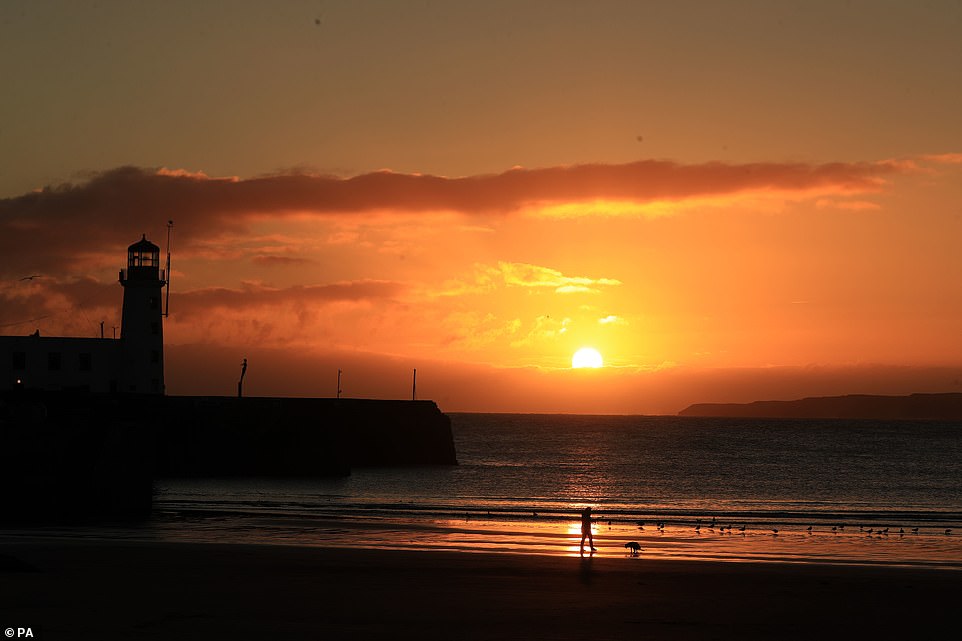 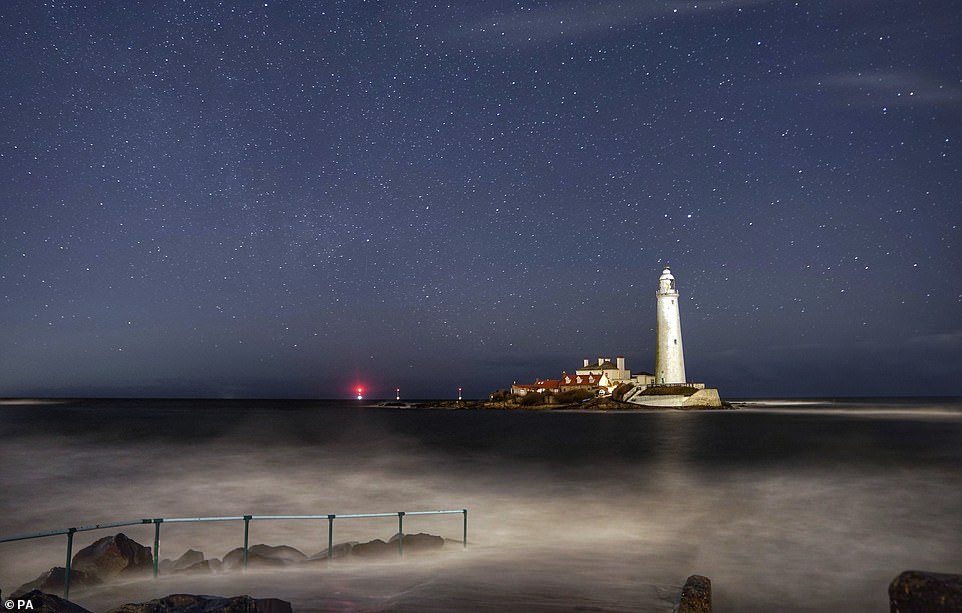 A starry sky above St Mary’s Lighthouse at Whitley Bay in Tyne and Wear, photographed in the early hours of this morning