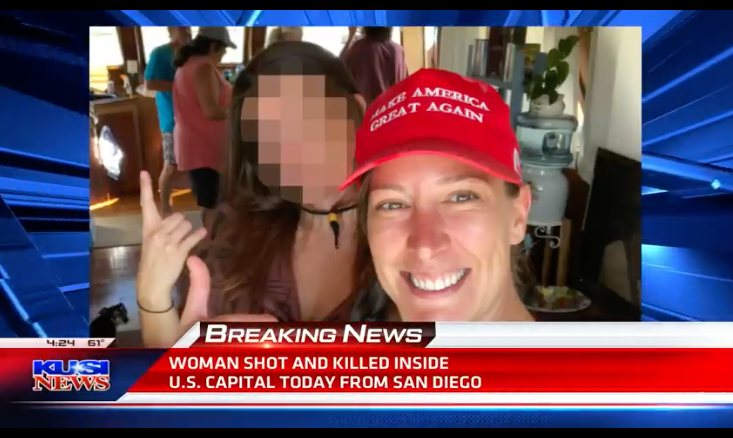 The only thing the four protesters who died at Capitol Hill had in common was their love of Donald J Trump.

From California, Georgia, Pennsylvania and Alabama, the Maga supporters thought the president was either the second coming of Jesus or their only hope at taking back the country.

“Ever since he was running for election, back in 2015, she’s been bananas over Trump,” grandfather Tony Mazziott told Good Morning America. “She thinks he’s the final coming of the Lord, I guess.”

Mr Maziott described his granddaughter as an “excellent patriot”

“She served time in the military and she’s passionate about everything, particularly Donald Trump for some reason,” he said.

Her husband, Aaron Babbitt, told KSWB that she flew from San Diego to meet with friends for the protest in Washington DC and got killed “voicing her opinion”.

“She loved her country and she was doing what she thought was right to support her country, joining up with like-minded people that also love their president and their country,” Mr Babbitt said.

The first Trump event she had ever attended, Ms Boyland was hesitant to travel to Washington DC but went despite family trying to talk her out of it.

She had planned to “hang back” but was emboldened by Mr Trump’s speech before she was trampled to death in the Rotunda, the family told The Daily Mail, saying the family blames the president.

“She just really just believed in Trump and that’s it,” they said.

“This was her first one. She wasn’t even supposed to go… we all didn’t want her to go. She was hanging back and then after the speech yesterday…”

“Someone said she was trampled, others said she collapsed inside the Rotunda. we’re still trying to figure it out,’ the relative said.

Brother-in-law Justin Cave said the 25th amendment should be invoked to remove Mr Trump from the White House.

“Roseanne, like a lot of people there, was really passionate about her beliefs as was her right,” Mr Cave said. “I personally believe that the President incited a riot that cost four of his biggest fans their lives. One of them happened to be my sister.”

Mr Greeson’s son announced on Facebook his day suffered a heart attack during the event, saying that he made him the man he was today, according to the AL.com.

“We all loved him so much,” Mr Greeson said.

“Always going to car shows to support me and to enjoy the cars together. Him my brother and I would ride motorcycles together and have a great time. He was such a great man we all miss you so much. Please keep our family in your thoughts and prayers.”

Travelling from Athens Alabama, it was unclear if Mr Greeson was on the Capitol grounds when he suffered the medical emergency.

Posts to social media accounts showed Mr Greeson posing in photos with AR-15 rifles and showing comments including: “Let’s take this f*****g country BACK! Load your guns and take to the streets. ”

Another said: “Let’s give them a war… Democrats don’t have guns… we do.. bring your stick, I’m bringing my guns.”

A computer programmer who founded a social media websites Trumparoo and “The Scummy Democrats”, Mr Phillips had told a van of Trump supporters the protests were the first day of the rest of their lives.

“It seems like the first day of the rest of our lives, to be honest,” he said, according to The Philadelphia Inquirer.

“They should name this year Zero because something will happen.”

Mr Phillips suffered a stroke and later died. It was unclear where he was at the time of the medical emergency.

Mr Phillips was a 25-year resident of Philidelphia before relocating to Bloomsburg to care for his mother who suffered Alzheimer’s, he said in an interview with The Inquirer, which reported he studied computer science at Temple University.

He was planning to start a political action committee (Pac) and set up a network of conservative news sites, telling the outlet on the way to the rally there needs to be more uncensored spaces for voices like his.

“I envision a whole network of niche social networks based on interests. You don’t need Twitter and Facebook, they hate us. They don’t need us there.”

“I can confirm that I was married to Benjamin Philips from 1999 to 2004. Since our divorce in 2004, we have had no relationship beyond occasionally discussing the care of our two teenage children,” she wrote. “As my children are grieving and processing yesterday’s shocking events, I respectfully request privacy.”