The NHS is sending Covid patients to hotels in a desperate attempt to boost capacity on intensive care wards, it has been suggested.

Patients are already being transferred from King’s College hospital, London, to a nearby Best Western-branded hotel in Croydon, reports The Guardian.

And other trusts are also in talks with nearby hotels about transferring patients to them, after exhausting their critical care capacity and facing barriers to utilising the Nightingale hospitals.

Organisations such as St John Ambulance and the British Red Cross, as well as the military and available health service staff, will also get involved.

The Health Secretary Matt Hancock today admitted Number10 was looking at ‘all options’ to ease mounting pressure on the health service.

‘There are huge pressures on the NHS and we are looking to all different ways that we can relieve those pressures,’ he told Sky News.

‘We would only ever do that if it was clinically the right thing for somebody. In some cases, people need sit-down care, they don’t actually need to be in a hospital bed.’

Many hospital trusts are reported to be in discussions with hotels about the move after exhausting capacity in their critical care units and facing barriers to utilising spare beds in Nightingale hospitals.

There were more than 35,000 Covid patients in Britain’s hospitals by January 10, according to the Government dashboard, up 21.5 per cent from the week before. 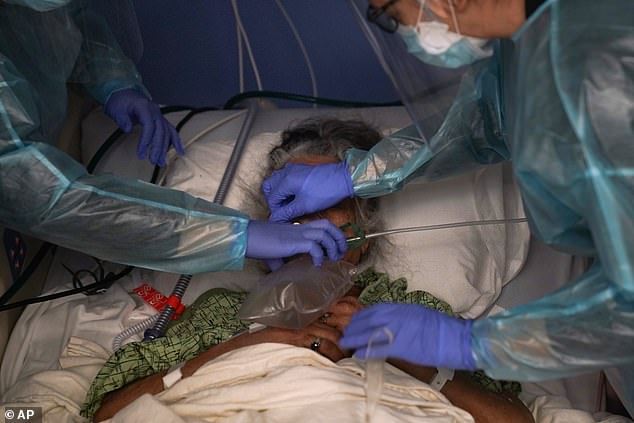 But families will be expected to play a ‘key role’ in looking after loved ones who are discharged early, it was claimed last night.

London Hotel Group, which owns the Best Western chain, has taken Covid patients from King’s Cross Hospital and is in talks with 20 NHS Trusts. It says it could provide 5,000 extra beds.

The news came after reports that the NHS is on ‘a knife-edge’ with hospitals close to the brink.

Medical students and receptionists will now be brought in to help cope with a huge surge in Covid-19 patients, say experts.

New figures show one in 20 patients are waiting more than 12 hours for beds – yet the worst of the crisis will not arrive until next month. Bosses say core staff face ‘unsustainable workloads’. 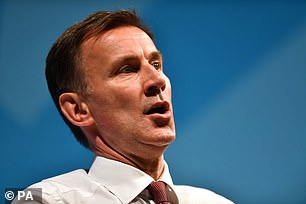 Jeremy Hunt, chairman of the Commons health committee and ex-health secretary, warned the NHS is on an ‘absolute knife edge.’

Volunteers and social care staff will be moved to hospitals to take up roles such as fetching equipment and food for patients.

New roles have been created to help fill the desperate shortage of staff. Secretaries and students will act as ‘medical ward scribes’ to write down clinical decisions, patient histories and times of treatment.

Students are also helping with tasks such as ‘proning’ patients – turning them on to their fronts.

Meanwhile the Royal College of Emergency Medicine says that in the week to January 3 more than 2,500 patients waited for longer than 12 hours to be admitted to a bed at 32 NHS trusts.

Dr Katherine Henderson, RCEM president, said: ‘It is a dire situation to be in. Our departments are crowded, with many places having no choice but to administer care in corridors.’

Jeremy Hunt, chairman of the Commons health committee and ex-health secretary, urged people to obey restrictions to cut infection rates. He told the BBC: ‘I think the NHS will in the end find intensive care, critical care, beds for all those who need it. But it is on an absolute knife-edge.’

Chris Hopson, chief executive of NHS Providers, said he expects pressure to spike in February. He warned a health and social care committee of MPs yesterday: ‘It is pretty clear the infection rate is not going to go down as quickly as it did in the first phase.’

The rapid rise in cases was now spreading to the East of England into the Midlands, the North West and South West, he added.

‘That’s a particular worry because trusts in the Midlands and the North have got significant numbers of patients still in hospital from the second surge.’

0 0 0 0
Previous : Lisa Montgomery: First federal execution of woman goes ahead in 67 years after appeal lost
Next : A generation sleepwalking into retirement poverty