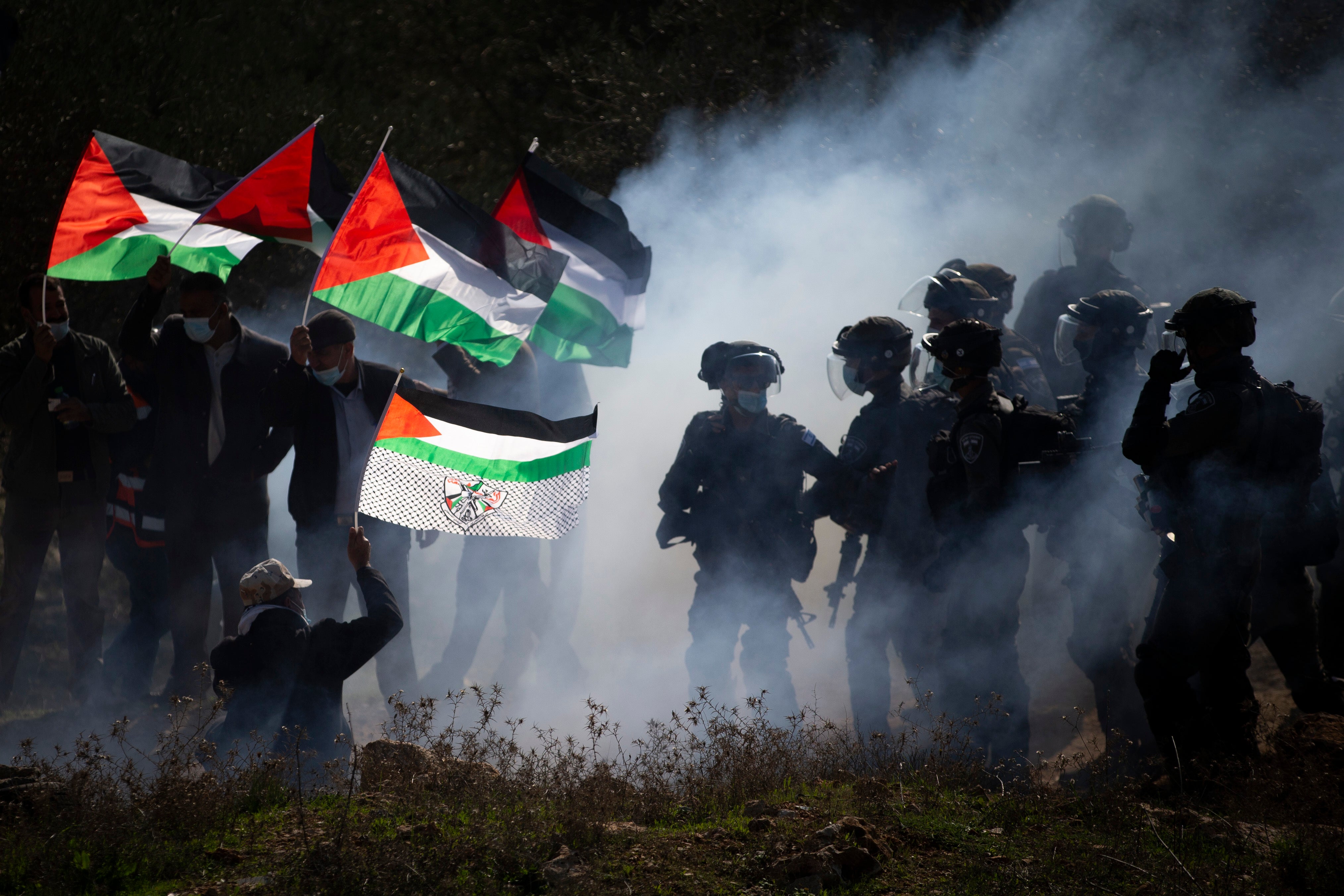 Israel is an apartheid regime that works to perpetuate Jewish supremacy over Palestinians in the entire territory under its control, one of Israel’s most prominent rights groups has said, prompting backlash from Israeli authorities and supporters of the country.

In a new position paper B’Tselem concluded Israel was not a democracy and its actions met the bar of apartheid after considering “the accumulation of policies and laws that Israel devised to entrench its control over Palestinians”.

However, Ohad Zemet, a spokesperson of the Israeli embassy in London, dismissed the paper as “false claims” and “nothing more than a propaganda tool”.

B’Tselem is not the first Israeli rights group to conclude that Israel’s treatment of the Palestinians amounts to apartheid and its Tuesday paper joins a growing chorus of groups and experts warning actions Israel is taking could amount to crimes against humanity.

B’Tselem found that across the entire area between the Mediterranean Sea and the Jordan River, the Israeli regime “implements laws, practices and state violence designed to cement the supremacy of one group – Jews – over another – Palestinians”.

It said Israel engineers space geographically, demographically and politically to do that, leaving the Palestinians living in an area that is fragmented into several units, each with a different set of rights – given or denied by Israel.

“Israel is not a democracy that has a temporary occupation attached to it: it is one regime between the Jordan River to the Mediterranean Sea, and we must look at the full picture and see it for what it is: apartheid,” wrote B’Tselem’s executive director, Hagai El-Ad.

“This sobering look at reality need not lead to despair, but quite the opposite. It is a call for change. After all, people created this regime, and people can change it.”

B’Tselem’s Amit Gilutz told The Independent that “calling out the Israeli regime for what it is – an apartheid regime … accurately reflects changes that have accumulated on the ground over many years”.

He added that a “different future can be achieved”.

“The overarching principle, in any of these scenarios, remains the same: for it not to be apartheid, group supremacy must not be state policy.”

Adalah, a Palestinian-run legal centre in Israel, backed B’Tselem’s statements. Its general director Dr Hassan Jabareen, told The Independent: “Israel has now changed the rules of the game, and we have no choice but to use the a-word. This is apartheid.”

The Israeli authorities vehemently dismissed the “false claims in the so-called report”, saying it is “not based on reality but on a distorted ideological view”.

“Israel is a strong and vibrant democracy that gives full rights to all of its citizens regardless of religion, race or gender,” Israeli embassy spokesperson Zemet told The Independent.

“The Arab citizens of Israel are represented in all branches of government – in the Israeli parliament, in the courts (including the Supreme Court), in the public service, and even in the diplomatic corps where they represent the State of Israel around the world,” he added.

The paper was also met with backlash from right-leaning experts and supporters of Israel.

B’Tselem highlighted two milestones in recent years which cemented their conclusion that Israel is an apartheid regime.

The first they said was the 2018 Nation State law, which holds a constitution-like status, and defines Israel as the national home of the Jewish people, who have the exclusive right to self-determination in Israel.  Other articles within the law downgraded the status of Arabic from an official language and stated that developing Jewish settlements is “a national interest”.

The second milestone was official statements regarding formal annexation of parts of the West Bank “debunking claims of temporary occupation,” the group said.

Israel captured the West Bank, East Jerusalem and Gaza in the 1967 Middle East war and immediately annexed east Jerusalem in a move not recognised internationally.

There are now over 400,000 Jewish settlers living in the West Bank and some Israeli, Palestinian and international rights groups argue the West Bank has also been de facto annexed.

Palestinians have limited self-governance under the 1990s Oslo Accords. B’Tselem says that the Palestinians are  “subordinate to Israel” and in reality more than 2.6 million Palestinian subjects live in the West Bank, in dozens of disconnected enclaves, “under rigid military rule and without political rights”.

Meanwhile in Gaza, Israel withdrew troops and settlers from the strip in 2005 but imposed a blockade and control after the militant Hamas group violently seized power there two years later.

B’Tselem argues that by dividing up the territories like this and using different means of control, Israel masks the underlying reality that roughly 7 million Jews and 7 million Palestinians live under a single system with vastly unequal rights.

“We are not saying that the degree of discrimination that a Palestinian has to endure is the same if one is a citizen of the state of Israel or if one is besieged in Gaza,” El-Ad said. “The point is that there isn’t a single square inch between the river and the sea in which a Palestinian and a Jew are equal.”

Over the last two years Benjamin Netanyahu’s threats to formally annex swathes of the West Bank, an action which is illegal under international law, have sparked mounting discussions about apartheid.

In May Michael Lynk, the UN special rapporteur for the situation of human rights in the occupied Palestinian territory told The Independent annexation “would mark the rise of the 21st century apartheid one-state”.

UN experts in June echoed those warnings, saying that annexation would be a “vision of a 21st century apartheid” as it would crystallise “an already unjust reality: two peoples living in the same space, ruled by the same state, but with profoundly unequal rights”.

B’Tselem argues that apartheid is already a daily reality.

The first time such a charge was made was by a UN body in 2017, when UN Economic and Social Commission for Western Asia concluded that “Israel has established an apartheid regime that dominates the Palestinian people as a whole.” At the time Israel’s foreign ministry likened the report to Nazi propaganda.

In July Israeli rights group Yesh Din published a legal opinion arguing that Israel was already committing the crime against humanity of apartheid in the West Bank.

The Rome Statue of the International Criminal Court and the Apartheid Convention of 1974, which entered into force in 1976, defines apartheid as a crime against humanity.

However, it has never been prosecuted before, and so according to international law experts no one knows what kind of evidence judges would demand, to find that a state has engaged in apartheid.

An International legal expert told The Independent that while there would be no formal repercussions for Israel over reports like B’Tselem’s, a growing number of well-respected rights groups making the accusation of apartheid could lead to possible international law consequences.

“The more that well-respected human rights groups make the accusation, the more legitimate it will be for others – particularly states and international organisations – to follow suit,” said Kevin Jon Heller, professor of international law and security at the University of Copenhagen and professor of law at the Australian National University.

“And that could be very damaging to Israel’s reputation… and lead to real international-law consequences.”

He said the prohibition of apartheid is “considered a jus cogens norm – a fundamental rule of international law, like aggression, genocide”. And so, if enough states agreed that Israel was responsible for practicing apartheid, international law would obligate states to take action such as avoiding doing anything that would facilitate this, like permitting their corporations to help Israel build illegal settlements.

He said they would also be obligated to cooperate to bring apartheid to an end, including supporting sanctions.